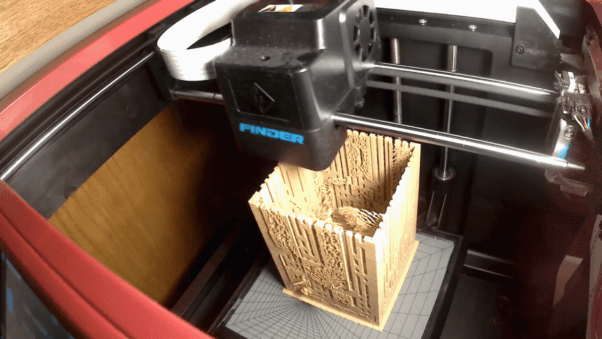 The 3D printers have been around for a while now. They have even evolved with time. Now the products of the 3D printers are almost indistinguishable from the real deal. However, science and technology never truly get to an end. With this in mind, it should not surprise you that 3D printers are being improved upon.

Now we have 3D printers that make use of laser technology to make their products as neat and realistic as possible. This might not seem like much, but to a discerning eye, the little faults in other printers are all too easy to point out. For instance, most 3D printers do not print perfect edges when printing cube-like shapes. The edges of the cube tend to be a bit curved.

The 3D laser printer, also known as the CR- 01 3D Printer is a new age printer equipped with cutting edge laser technology. The comment about it being “cutting edge” can be taken quite literally. This is because the printer can carry out CNC cutting.

This CNC cutting can be carried out on several materials including paper, plastic, wood, and PCB. The CR- 01 3D Printer does this by making use of extremely high rotational speeds. The products of this cutting process usually have smooth finishes.

The 3D laser printer (CR- 01 3D Printer) has a relatively large printing size so you can increase your scale of imagination to include larger objects that some other 3D printers cannot create. So you have larger and more accurate models of whatever design you want. The size is 200*200*200mm.

Some might assume that the presence of laser technology on the printer makes it more unstable than other printers. This is contrary to the truth. The CR- 01 3D Printer is cast using industrial strength aluminum frames. This gives the printer sufficient stability required to carry out its printing, engraving or cutting process without interruption.

The User Interface (UI) is smart and can handle unexpected power interruptions (for any reason). This means that if during the printing, cutting or engraving process power is interrupted, when power is restored, the printer continues freely from exactly where it stopped.

It is very easy to assemble and even easier to change its modular machine heads if the need arises. The printer uses a full belt drive for better stability as well as a V-guide rail and pulley system for reduced noise and smoother running (not to mentioned increased service life as a result of reduced friction).

In conclusion, the 3D laser printer is a multi-purpose modular printer. It is aesthetically pleasing and extremely accurate with deviation as low as +/-0.1. If you are thinking of getting a printer, a multipurpose one equipped with laser technology might just be the way to go.

The Ultimate Guide to 3D scanners

How Many Types Of Press Brakes Are There?

Get your Most Amazing Tooling Services Today

The Ultimate Guide To Purchasing The Best Laser...

How Cold Forging in China Changed the Healthcare...

Why the periodic table is important

Factors To Consider When Shopping For Gaskets Online...

Roles Of The Chinese Fulfillment Center

What are TFT LCD Display Modules?

How Many Types Of Press Brakes Are There?